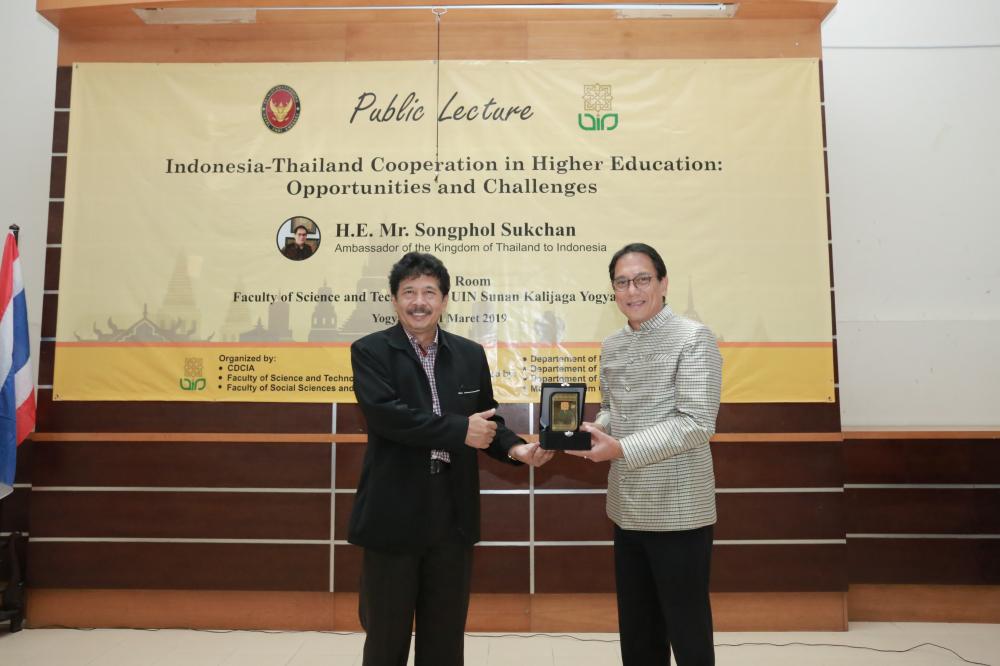 UIN Sunan Kalijaga Rector with the ambassador of The Kingdom of Thailand, H.E Mr. Songphol Sukchan

Sleman (1/3). International office UIN Sunan Kalijaga in collaboration with the Faculty of Science & Technology and Faculty of Social Sciences & Humanities organized Public Lecture with topics about Indonesia-Thailand Cooperation in Higher Education: Opportunities and Challenges. Held at theatrical room Faculty of Science and Technology, the public lecture was delivered by the Ambassador of the Kingdom of Thailand to the Republic of Indonesia, H.E. Mr. Songpol Sukchan. Mr. Sukchan is a premiere diplomat, having served as Director-General of the European Affairs Departement in the Thai Ministry for Foreign Affairs before being appointed as the Ambassador to Indonesia. In this opportunity, Mr. Sukchan was accompanied by his spouse, Mrs. Piyachanid Suthinont Sukchan and other delegates of the Royal Thai Embassy in Jakarta.

Mr. Songpol explained about the opportunities that are widely open for UIN Sunan Kalijaga to cooperate with other Universities in Thailand. Prof. KH. Yudian Wahyudi, M.A. Ph.Dwelcome the various opportunities and open any implementation of a collaborative program in the future. Meanwhile, in his public lecture, Mr. Sukchan presented the country’s cultural diversity, ranging from food, sports, to demography. The public lecture was also attended by more than 200 attendees, including Thai students that are studying in Yogyakarta. UIN Sunan Kalijaga itself has more than 30 Thai students, studying at undergraduate, master and doctoral programs. (DP)